If history is any indication, Sunday’s Daytona 500 will feature two themes: crashes and abnormal finishes.

So let’s break it down by the numbers: Which drivers are more likely to crash, and how random will these finishes be?
First, the crashes.
If there is one driver you’d expect more than any other to crash, it would be Brian Scott. Based on the last five years of data at the restrictor-plate tracks, across NASCAR’s top three series, his accident rate is almost two for every 500 miles raced. Pole-sitter Chase Elliott is next at about 1.5 crashes every 500 miles. But Elliott is a rookie, so chances are likely that he’ll keep reducing that number over time.
On the other end of the spectrum, notice Dale Earnhardt, Jr. with the lowest crash rate of big time Sprint Cup drivers. This is one reason why he’s almost always a favorite at Daytona. As always, the data and numbers come from Andrew Maness at Pit Rho, a racing data and analytics software firm.
You can review the chart to find your favorite driver along the spectrum:

Next: The randomness of Daytona. Any racing fan knows intrinsically that plate races can produce unique finishes. But now we can see exactly how much – what that number is.
Below is the list of “oddball finishes” at each track – another way of saying how different the results at one track are compared to every other track. The smaller the number, the more predictable a track is. A bigger number means the results at that track are unrelated to every place else.
Not surprisingly, the restrictor-plate tracks – followed by the road courses – are the two most unpredictable tracks. But we can see exactly how much now. Daytona has a 10.2 – meaning the average finish at Daytona for the average driver is more than 10 spots different when compared to all other tracks.

And if you want to break it down even further, you can see each track on it’s own chart below.
The horizontal lines at Daytona and Talladega tell you that no matter how drivers do at those plate tracks, it has no predictive value elsewhere. Look at the bottom tracks: Kansas, Chicago, and Kentucky. Those diagonal lines tell you if you do well at those tracks, you’ll probably do well everywhere else.
If you want to find out who is going to be a championship threat, maybe you just need to worry about those three tracks. Just for fun, notice this. The winners at some of these tracks in the past years all ended up being the champions that season.
Kentucky had Brad Keselowski in 2012 and Kyle Busch in 2015. Chicago had Tony Stewart in 2011 and Keselowski in 2012. Kansas had Jimmie Johnson in 2008 and Keselowski in 2011.
But Daytona is the opposite of those tracks. Enjoy the race this weekend for what it means as a standalone race – just don’t try to extrapolate anything around momentum or who has a shot to be the champion. 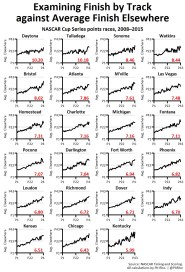 Eric Chemi runs data journalism for our sister network CNBC, including a heavy dose of sports analytics. Prior to that, his NASCAR analytics have been part of television broadcasts, and he has consulted for Sprint Cup teams on strategy, statistics, data, and analytics. He graduated with an engineering degree from MIT.