Chase Elliott has said he just wants to be himself and not have his career compared to that of his predecessor, Jeff Gordon.

But the comparisons will continue as Elliott, 20, became the youngest pole-sitter for the Daytona 500 with a speed of 196.314 mph. Matt Kenseth qualified second at 196.036 mph.

“This is a very, very cool day,” Elliott told Fox. “I don’t know that this opportunity has sunk in yet, much less sitting on the pole for the Daytona 500.”

The pole is the 10th for Hendrick Motorsports in the race and comes the year after Gordon won the pole for his final start in the Daytona 500.

“Daytona 500 qualifying is about the team guys and the effort they put into these cars,” said Elliott. “It was nothing special I did. It’s just the work they did this offseason to make it happen.”

Kenseth will be starting on the front row of the Daytona 500 for the first time in his career.

“It’s funny the way this works,” Kenseth said. “I was coasting around the apron and knew Chase was ahead of me and figured (Earnhardt Jr.) was going to beat me because he was faster the first round. (I was) thinking maybe, ‘do all that work and qualify third, you might as well be 20th.’ I was pleasantly surprised when (Earnhardt) dropped in right behind us.”

The rest of the 40-car field for the Daytona 500 will be set Thursday in the dual qualifying races.

Blaney, driving the No. 21 for the Wood Brothers, locked himself into the race as an “open” car without a charter.

“The biggest relief for us is to know you are locked in and are good to be able to race in the 500,” Blaney said. “That kind of lets us go race on Thursday a little bit more than we would have instead of playing it conservative if we weren’t locked in.”

BK Racing’s Matt DiBenedetto also locked himself into the race with the 26th fastest speed.

The cars of Kevin Harvick and Brian Vickers failed post-qualifying inspection due to track bar violations. Their times were disallowed and will start at the rear of their qualifying races.

Martin Truex Jr. was the only driver to not make a qualifying attempt. NASCAR didn’t allow the No. 78 on the track due to its roof flap not being in compliance. Truex will also start at the rear of the field in his qualifying race. All three teams could be subject to further penalty. 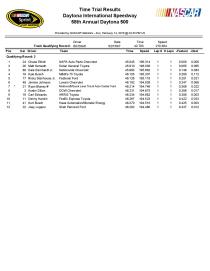 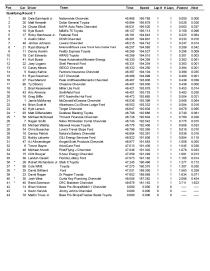