In a bit of a power move, all three Team Penske associated cars took to the track in the final minutes of the second Daytona 500 practice Saturday and drafted after a session full of single-car runs.

The strategy resulted in all three cars, led by defending Daytona 500 champion Joey Logano, sweeping the top of the speech chart.

Logano finished with a speed of 195.933 mph. Brad Keselowski followed at 195.848 mph and Ryan Blaney, driving the No. 21 for Wood Brothers Racing, was third fastest at 195.797 mph. Blaney is one of eight drivers in “open” cars that are not guaranteed a starting spot in the Daytona 500 as part of the new charter system.

Dale Earnhardt Jr. was fastest in the first practice session of the day. 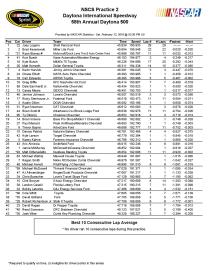