The first practice session of the Sprint Cup season, for Saturday night’s Sprint Unlimited, is in the books and it ended with Kyle Larson and Kasey Kahne on top of the charts.

Brian Vickers, who is replacing the injured Tony Stewart during Speedweeks in Daytona, was seventh fastest. 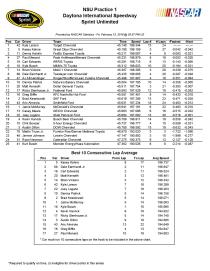