Fifteen years ago, the NASCAR community experienced one of its darkest days when Dale Earnhardt Sr. was killed in a last-lap crash in the 2001 Daytona 500.

You likely remember where you were that day, which is the unavoidable focal point for anyone attempting to tell the story of the Earnhardt family and the current state of NASCAR. The former is the task Yahoo! Sports writer Jay Busbee took upon himself with his upcoming book from Harper Collins titled, “Earnhardt Nation: The Full-Throttle Saga of NASCAR’s First Family.”

The book, which will be released on Feb. 16, sets out to document the story of the Earnhardt’s, beginning with Dale Sr.’s father, Ralph Earnhardt, and his days of racing at Metrolina Speedway in North Carolina and ending with his grandson, 13-time most popular driver and two-time Daytona 500 winner, Dale Earnhardt Jr.

Busbee, a native of Atlanta, developed his love of the sport through NASCAR’s annual season-ending visits to Atlanta Motor Speedway. He helped establish the “From the Marbles” NASCAR blog at Yahoo in 2008 and “Earnhardt Nation” is his first NASCAR related book.

Busbee spoke with NBC Sports about the origins and challenges of the book and shared his thoughts on the Earnhardt legacy.

The following Q&A has been edited and condensed.

NBC: What was the impetus for you to write this book? Was it the only topic you wanted to write about or did you pick from a variety of NASCAR topics?

Jay Busbee: No, it wasn’t so much NASCAR topics, I was kicking around a bunch of topics with my agent, and I noted to him that no one had really done a biography of the Earnhardt family from beginning to end. There are plenty of books of Senior, plenty of really bad books on Senior. I wish you could see my bookshelf right now because I got all of them. I went through all of them and they range from some of them being written immediately after Senior died and they’re sort of over the top praising and some of them are just really amateurish stuff. There have been a few on Junior, most notably the one he did himself and the one he kind of had oversight over. But there hasn’t been one on the whole family, starting with Ralph and moving forward. I saw that as kind of a real hole in the market. What I have since learned is that a lot of publishers don’t necessarily want to or they don’t think NASCAR fans buy books. Harper Collins took a chance on me, and so we are determined to prove all of those publishers wrong. There’s just not a whole a lot of NASCAR books out there.

NBC: When I think of NASCAR books, I think of coffee table books, books written by the Waltrips and books that are typically ‘remember the good old days?’ Nothing that takes an actual hard look at a certain time and place in NASCAR history.

Busbee: I think you’re exactly right, and that’s what I was looking to do — give NASCAR the serious, honest, literary treatment. I’m not saying I’m so literary of an author, but give it the serious, honest treatment that it deserves. We’ve got some great writers in this sport. Ed Hinton could go toe-to-toe with anybody. These guys are great, and the sport deserves to have more literary recognition and more awareness. This is hopefully my small contribution to that. 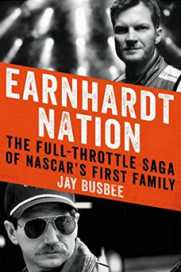 NT: What was your research like? What sources did you seek out for this?

Busbee: I didn’t get to talk to the family, I reached out to them, and some of them I never heard from, some of them I heard from directly and they said ‘thanks, but no thanks,’ and they decided not to participate. I had talked to either the family or representatives of the family, and some of them were deeply considering it, but decided in the end not to talk to me. That was unfortunate, but the truth is most of the family has spoken enough in other places that I’ve gotten good commentary from them from other locations. Like Kelley Earnhardt has got a podcast, Dale Jr., that guy spills out his soul every week at a press conference. Then a lot of times, to get the true picture, it’s helpful not to talk to the subject, but to the people around the subject as you know. I had a lot of people that were very, very willing to help. Ranging from close, long-time friends, childhood friends, right on through to people that had one or two encounters with one of the Earnhardt’s. I tracked down a guy who used to race strictly stocks with Dale Jr. in Myrtle Beach, and they would tell stories about what they did back in the old days or guys like Eddie Gossage at Texas (Motor Speedway). He knew Senior back when they were just starting out in the late ’70s, early ’80s. He had some good stories then. That was my main approach.

NBC: With the prologue you wrote, there really isn’t another way you can start this story without starting on Feb. 18, 2001, right?

Busbee: Yeah, I thought about that, and I didn’t actually start it there. The first time that I wrote it, the first draft started with what is now a separate prologue, which is now part of chapter one and it starts at the Metrolina Speedway and it was a little bit more touchy feely I guess. It sets up the players there because the Metrolina Speedway was such a critical part of the development of the Earnhardt legend. But my editors and I discussed it and as painful as it is, as awful as it is, that date in 2001, that’s what it all revolved around. That’s where everything changed literally, symbolically, metaphorically, whatever you want to use. Everything rotates around that date and that moment. We’re 15 years past it now and it’s still a fresh wound for a lot of people, but we can start to get a historical distance on it and yeah, any story about the Earnhardt’s has to pivot around that date and always will.

NBC: In all of your research, what was the biggest tangent you went on to follow a story that you wanted to include in the book?

Busbee: There was a period of time in the early 2000s where Junior was just a flat-out celebrity. There’s just no way around it. After his father’s death, he became this huge celebrity in a People magazine sense. He was even in People’s Sexiest Men Alive issue. It was pretty funny running down that aspect, and all these people that wanted to meet him – Sheryl Crow wanted to meet him, Mötley Crüe wanted to meet him. He would go hang out with Ludacris and all this stuff, and I don’t think he does as much of that now, but for a short time there in his late 20s, early 30s, he was really living the celebrity life.

NBC: What surprised you the most about the Earnhardt family? Was there something about Dale Sr. you didn’t know?

Busbee: Senior, what fascinated me was once someone dies as you know, they become an icon, they become not a person, but an icon. What I found in talking to people is that Dale Sr., yeah he was an icon, he was that nine-foot statue (that’s) in Kannapolis, but he was a flawed human being just like all the rest of us. There were times he liked to joke around with people. His jokes would be flat-out mean sometimes. He could be a jackass to people, as we all can at times. I think that’s the important thing to remember is that he seemed to be by all accounts a good and decent soul who was trying to make up in his last years for the mistakes he knew he had made in terms of parenting in his early years. Because he was not a great father early on, and he admitted that. Especially with Taylor, he was much closer to her than his first three kids, and I think he really tried hard to mend those fences that he had never even built with his early kids.

NBC: We just got the Jeff Gordon farewell tour. What do you think a Dale Earnhardt Sr. farewell tour, had he gotten it, would have looked like?

Busbee: I never even thought about that. That’s a really good question. I think it would look a lot like Tony Stewart‘s is going to because he would have been pissed off that he had to retire. Obviously, Stewart has had different issues that have dogged him. But I think that both of those guys, they didn’t know anything but racing. I think Senior’s retirement tour, everybody would have been giving him grief. Everybody. There would have been rocking chairs and walkers and all kinds of stuff.

NBC: Do you think Dale Jr. finally solidified his own identity as a driver when he won his second Daytona 500?

Busbee: I think he had done it before that, but I think that certainly helped. From a symbolic perspective, when you have passed your dad, you’ve won more Daytona 500’s than he did, he won it in straight out dominating fashion. I don’t know if you were at that or you remember it, but he was winning the whole damn thing all the way through it. It was great to see. It was a dominating performance, it wasn’t a rain-delayed victory or something like that. I think that did help him. The guy is always going to carry his father’s name with him because of his name. He’s always going to be Junior. If you’re Junior, you’re Junior to something. But I think he’s really proven himself to everybody but the most die-hard fans that he is his own person, he is his own driver, he’s got his own value, if you will, he’s got his own strengths and he stands apart from his father in a way that I think his father would be proud of him now.

NBC: Hindsight being 20/20, what’s a question you would have asked Dale Sr. for the book?

Busbee: I think I’m going to steal one, there’s a pretty famous question that people ask, I can’t remember who said it and I probably should. It’s a profile question where you ask someone, ‘When were you happiest in your life and why? What moment were you happiest?’ He might well have said if I asked him that in 2001, he might have said ‘Right now, in this moment,’ because people have asked him that kind of thing. I think there are so many questions that I would have loved to have asked him: ‘Knowing what you know now, what would you do differently? What would you tell that crazy-ass Dale Earnhardt back in 1977?’ Those kinds of things. It fascinates me what people learn over the course of their lives that could have helped them earlier on and the benefits of accrued wisdom.