Ruben Garcia Jr. is moving this week, both literally and figuratively.

Professionally, he’s moving as a driver from the NASCAR Mexico Series to be part of the NASCAR Drive for Diversity program and compete in the NASCAR K&N Pro Series East.

The 20-year-old is following in the footsteps of friend and former competitor in the NASCAR Mexico Series, Daniel Suarez, who made history last season by becoming the first Mexican-born driver to win Sunoco Rookie of the Year honors in the Xfinity Series.

Garcia is one of six drivers chosen for the 2016 Drive for Diversity class. He’s also part of the 2015-16 NASCAR Next class.

“We are very excited to have Ruben as part of our 2016 class,” said Max Siegel, CEO of Rev Racing, which oversees the Drive for Diversity program for NASCAR. “Ruben proved his ability with his championship win in the NASCAR Mexico Series this past season.

“We have all the confidence in the world that Ruben will continue to find career milestones with Rev Racing and the national touring series.”

“To race two full-time seasons will be a great opportunity for me to earn more experience,” Garcia told NASCAR Talk. “(Being part of the Drive for Diversity program is) a great step for me as a race car driver and a person because this program helps you develop all your skills on- and off-track.

“Since I was very young, making a full-time season in some of the NASCAR American series, it was one of my biggest dreams. I feel it’s the right time to be part of this opportunity, I’m honored to be part of Rev Racing team and the Drive For Diversity 2016 Class. I think it could be a great year. Being around with all these people with lots of experience in the sport is going to help me a lot.” 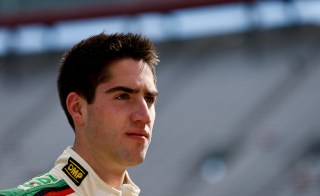 Garcia also is looking forward to renewing his friendship with Suarez.

And then came 2015. Garcia rolled through the Mexico circuit, earning three wins, eight top fives and 12 top 10s in 15 races to become the youngest driver in the series at age 19 to win the championship. He also earned four poles and had an average start of 4.0 and average finish of 7.3.

Growing up, open-wheel racing was king in his homeland, Garcia said. But as he grew older, he noticed a shift in racing popularity to the NASCAR Mexico Series.

“When I was young, open-wheel racing was more popular because we didn’t have a NASCAR series in Mexico,” he said. “I started watching guys on TV like Jeff Gordon and Dale Earnhardt Jr. and I found it to be a very gripping type of racing.

“When I first drove in a series that is like the Xfinity Series in Mexico, and in my first time on an oval, it was very exciting. It was the best experience I ever had on a track.

“I decided that the Mexico Series was something I’d like to keep going on, on the NASCAR format and oval format because it was so much fun to drive ovals and those kind of cars, fighting for position and getting so close to each other, as well as the contact involved.

“It was such a great event for me that it was what I decided I’d like to do for the rest of my career.”

Garcia is hoping to emulate Suarez’s success since moving up the NASCAR ladder.

“In Mexico, we have a lot of great talent that have enough to make it all the way to the top,” Garcia said. “Watching someone having grown up racing in Mexico, and watching him race in the Xfinity Series, it really makes us work hard and keep pushing to work for our goals.”