Believe it or not, after 11 seasons, Kyle Busch is a Sprint Cup champion.

The day following the season finale at Homestead-Miami Speedway, which Busch won for his first ever race victory in the Chase for the Sprint Cup, Busch made the media rounds on his way to New York City.

Here’s a breakdown of Busch’s championship campaign, which got off to a late start after his injuries in the Xfinity Series season opener at Daytona. 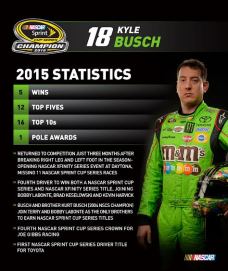