When Petty ran his final race in 1992 at Atlanta, it marked Gordon’s series debut. Petty gave all the competitors a silver money clip with their name on it that day.

Saturday, Petty gave Gordon $93 to put in that money clip. The amount represented $1 for each race Gordon has won. Petty told Gordon he had an extra dollar should Gordon win Sunday’s race.

The two drivers have combined for 11 Sprint Cup championships and 293 series wins. 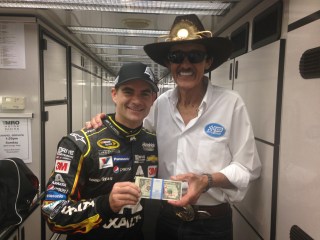