Denny Hamlin will start from the pole, with Joey Logano on the outside of the front row, in Sunday’s season-ending and Sprint Cup championship-deciding Ford EcoBoost 400 at Homestead-Miami Speedway.

Of the four finalists in contention to win the championship, Kyle Busch starts the highest on the grid (third). Jeff Gordon, who will retire after 23 years in Sprint Cup competition, is the second-highest championship qualifier (fifth).

Martin Truex Jr. will start 11th, while defending Sprint Cup champ Kevin Harvick will begin the bid for what he hopes will be a second straight championship from the 13th spot on the starting grid. 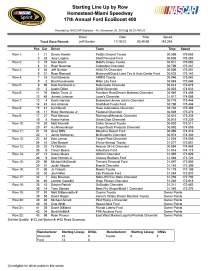