Austin Theriault, competing for the first time since a wicked wreck at Las Vegas on Oct. 3 left him with a compression fracture in his lower back, appeared very comfortable in his comeback. Theriault had the 11th-fastest speed at 166.950 mph.

Qualifying takes place at 4 pm ET this afternoon, and the season-ending and championship-deciding race takes the green flag at 8 pm ET tonight.

Here’s how the Truck practice played out: 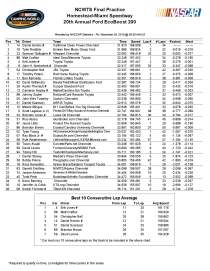