The Ford EcoBoost 200 at Homestead-Miami Speedway, the season finale for the Camping World Truck Series, will see the top three drivers in the point standings starting in the top five.

Matt Crafton, the defending two-time champion, earned the pole with a speed of 167.551 mph. It’s the 11th pole of his Truck career and his first at the 1.5-mile track.

But Crafton isn’t in the top two in points. That would be Erik Jones and Tyler Reddick.

Reddick, who trails Jones by 19 points entering Friday night’s race on Fox sports 1, will start one spot ahead of Jones in fourth after putting up a speed of 166.888 mph.

“Really happy to get inside the top five again,” Reddick told Fox Sports 1. Reddick has started in the top five nine times in 2015. “Unfortunately, I qualified the same place I did last year and made the same mistake … over drove (Turn) 3 and 4 last year. Thought we had a really good shot there and I just got too aggressive again.”

Jones, starting fifth, is making his first start ever at the 1.5-mile track as he looks to give Kyle Busch Motorsports its first Truck series title.

“That’s kind of where I thought we’d qualify, the way practice went and everything,” Jones told Fox Sports 1. “We have a good (Toyota) Tundra, just not one I think is dominate by any means. I think honestly we can go contend. I think we can definitely be a top-three truck.”

Filling out the top five is John Hunter Nemechek in second and Ben Kennedy in third. 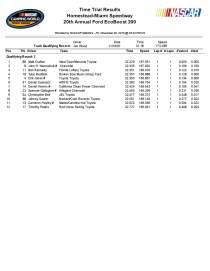 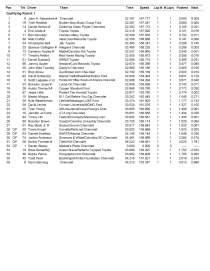