It’s come down to a single race for the title. Despite many ups and downs during the Chase, Kevin Harvick is the favorite to win it  – with a 44 percent chance. He won last year’s title at Homestead as well, and is the only repeat member in NASCAR’s final four.

It’s interesting to look back at how these four drivers started the Chase, compared to where they ended up. Our original Chase numbers  were published on Sept. 17, and we had Harvick as our favorite then. 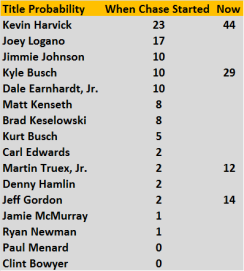 It’s compelling to see how Martin Truex, Jr. and Jeff Gordon each had only a slim 2 percent chance of winning the title. It’s a big accomplishment for both to even stay in contention this far. Whatever happens from here is gravy – at least from a statistical sense relative to September.

It’s been well documented why Joey Logano and Jimmie Johnson failed to make it in. And of course for Kyle Busch, his biggest challenge was just making it into the Chase. We figured he had a strong shot to advance once he was here and the points were reset.

We wrote in September that Harvick was an undervalued bet – he was an even bigger favorite than the betting markets gave him credit for. We ended up being right about that. But we were wrong in saying Vegas was overpaying for Truex. It turns out Vegas took the right bet on him, relative to our numbers.

In terms of Joe Gibbs Racing, we thought Vegas was overvaluing the entire team. Of their four drivers, only Busch made it. But that’s not outperformance. Twenty-five percent of all Chase contenders make it to the final by definition, so JGR getting one out of four is nothing special.

But Gibbs might be able to get the next best thing – the consolation prize of finishing fifth in points. There is a real money difference in finishing fifth versus sixth – about a quarter million dollars. This weekend, look for it to be a battle between Carl Edwards and Joey Logano. Most likely it will be Edwards who comes out ahead, because he enters the race with a 15-point lead over Logano.

As always, the numbers are based on a model designed by myself and Andrew Maness of Pit Rho, a racing analytics firm.