Say of it what you will, but there are those who believe that an appearance on the cover of Sports Illustrated before a major event will jinx the person or team shown.

Sports Illustrated revealed Tuesday that Jeff Gordon will be on its national cover.

The cover comes as Gordon prepares for his final Sprint Cup race and a chance to win his fifth series title this weekend in Homestead-Miami Speedway.

The most recent example of the Sports Illustrated cover jinx came last month with New York Met Daniel Murphy. He went into a slump after the cover appearance and made two costly errors in Game 4 of the World Series that the Mets lost. The team went on to lose the World Series to the Kansas City Royals..

Also, in August, tennis star Serena Williams appeared on the cover in pursuit of a Grand Slam victory at the U.S. Open and was upset in the semifinals.

There have been so many examples of the Sports Illustrated cover jinx that it has its own Wikipedia page. 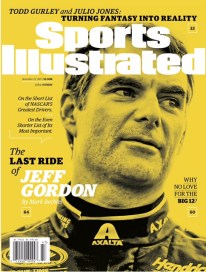