AVONDALE, Ariz. — Kevin Harvick finished the third round of the NASCAR playoffs as the top-ranked driver in the points standings, advancing to defend his championship in the season finale.

Jeff Gordon, who already had qualified for the title round at Homestead-Miami Speedway, was tied for second in points with Kyle Busch, who will race for his first title in NASCAR’s premier series.

Martin Truex Jr. was the fourth and final driver to advance to the championship in Miami, ranking five points ahead of Carl Edwards for the last spot. 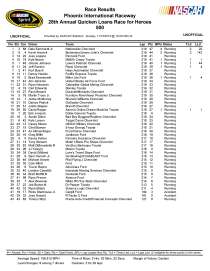