FORT WORTH, Texas — The NASCAR Sprint Cup Series will play host Sunday to the AAA Texas 500 at Texas Motor Speedway.

START: Actor John Krasinski will give the command for drivers to start their engines at 2:08 p.m. ET. The green flag is scheduled for 2:16 p.m.

PRERACE SCHEDULE: The Sprint Cup garage will open at 8 a.m. The drivers meeting is at noon. Driver introductions are at 1:20 p.m.

NATIONAL ANTHEM: It will be performed by Barbara Padilla at 2:01 p.m.

FORECAST: The wunderground.com site predicts 64 degrees at race time with a 0% chance of rain.

PAST TWO RACES: Six-time series champion Jimmie Johnson won both. He led the final eight laps of the Nov. 2, 2014 race after Jeff Gordon and Brad Keselowski collided while racing for the lead. Johnson won the April 11 race by outdueling Kevin Harvick on pit strategy. 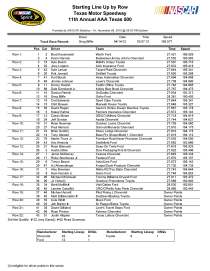