Kevin Harvick placed second. He’s finished in the top 10 in all but three of the 18 series starts he’s made this season. Series leader Chris Buescher finished 11th and holds a 24-point advantage on Chase Elliott, who placed eighth, with two races left. 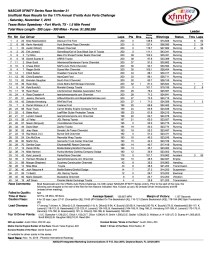