We all know what happened with Matt Kenseth and Joey Logano at Martinsville. So we can skip the recap and get right to the probabilities of who will make it to Homestead, and who can win the title: 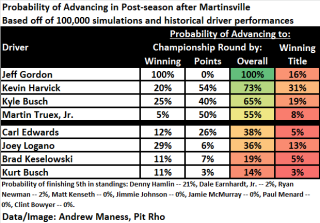 The data and image come from Andrew Maness at Pit Rho, a racing analytics firm. He and I designed the mathematical model to predict race and season outcomes.

Despite all of Logano’s success this year, he now has a 36 percent chance of making it to Homestead. His title chances are 13 percent – half of what they were last week.

The scary part for Logano is he only has a 6 percent chance of getting to Homestead on points. His best shot to advance is to win one of the next two races.

With Logano’s standing weakened, the new title leader is Kevin Harvick. At 31 percent, Harvick is the only driver with better than a 20 percent chance to win the crown. Kyle Busch is second at 19 percent, with Jeff Gordon third at 16 percent.

Notice the split between the top four and bottom four. The fight for the bubble is not close. Martin Truex Jr. has a 55 percent chance to advance, with Carl Edwards is at 38 percent. Because the “have nots” are so far back, we should expect to see them gamble for wins in the next two races. Kurt Busch and Brad Keselowski have low shots of advancing by points.

Pay attention to the difference between the probabilities of advancing versus winning the title. Gordon’s title shot is high only because he’s already advanced, but his performance this year doesn’t suggest he’d be a real threat at Homestead. Remember he only won at Martinsville because the top leaders were taken out.

That’s similar to Truex. He has a good shot of advancing, but a small shot of winning even if he gets there.

The contrasting examples are Logano and Harvick. Both of them need to make sure they get to Homestead, but if they do, they will be the favorites. In fact, Logano has almost the same chance to win the title as Jeff Gordon.