Cameron Hayley shot to the top of the speed chart in the second and final Camping World Truck Series practice session Thursday at Texas Motor Speedway.

Matt Crafton, who was fastest in the first session earlier in the afternoon, was 12th-fastest in the second session (176.171 mph).

Here’s how the second Truck practice played out: 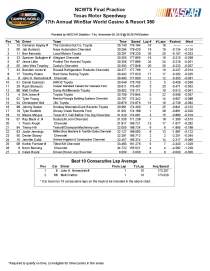