MARTINSVILLE, Va. — The NASCAR Sprint Cup Series will play host Sunday to the Goody’s Headache Relief Shot 500 at Martinsville Speedway, the opener to the third round of the Chase for the Sprint Cup playoffs.

START: Seven-time champion Richard Petty and Circle K Southeast Director of Marketing Tom Harman will give the command for drivers to start their engines at 1:10 p.m. ET. The green flag is scheduled for 1:15 p.m.

NATIONAL ANTHEM: It will be performed by the North Carolina State marching band at 1:03 p.m.

FORECAST: The wunderground.com site predicts 61 degrees at race time with a 15% chance of rain.

PAST TWO RACES: On March 29, Denny Hamlin fended off Brad Keselowski for his fifth victory at Martinsville. On Oct. 26, 2014, Dale Earnhardt Jr. seized the lead from Tony Stewart and led the final four laps of his last victory with crew chief Steve Letarte. 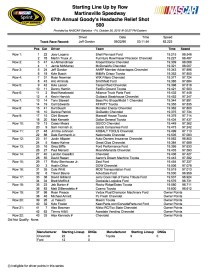