The series has races left at Texas, Phoenix and Homestead. 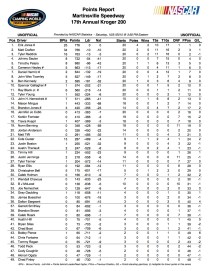