Being first in Friday’s solo practice at Martinsville Speedway wasn’t enough for Joey Logano. A few hours later, he went out and earned the pole for Sunday’s Goody’s Headache Relief Shot 500.

Logano covered the short track at a top speed of 98.548 mph, sweeping the pole for both Martinsville races this season.

Martin Truex Jr. earned the outside pole for the third time this season, with a speed of 98.487 mph.

“It’s an amazing run we’re on right now,” Logano, who is riding a three-race winning streak, told NBCSN. “I’m just the lucky guy that gets to drive this thing right now. It’s so much fun and we’re doing everything right. But all that can end in the blink of an eye, so we all just have to keep our focus.”

Six of the eight remaining drivers in the Chase for the Sprint Cup qualified in the top 12.

Carl Edwards and former Martinsville winner Kurt Busch were the only Chasers who failed to advance to the third and final round, qualifying 14th and 15th respectively.

Kasey Kahne spun in Turn 1 in the first round and backed the rear end of his Hendrick Motorsports Chevrolet into the wall. The damage was severe enough that the team was forced to go to a backup car.

“I ruined a pretty good car, a really good car, actually,” Kahne told NBCSN. “I held it out a little too late, I turned in and kind of broke and lifted off the throttle and got wheel-hopping. I just totally screwed it up myself.” 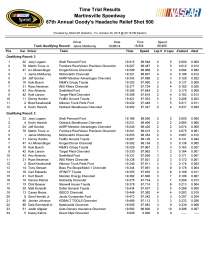 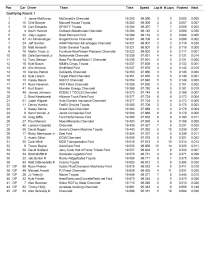