The winner of the last three races in the Chase for the Sprint Cup didn’t waste any time to show he is looking to make it four straight wins, leading Friday’s lone Cup practice at Martinsville Speedway with a speed of 98.826 mph.

Jeff Gordon, who is tied with teammate Jimmie Johnson for most career wins at Martinsville among active drivers (8 each), was second fastest at 98.364 mph, followed by Brad Keselowski (98.338 mph) and defending series champ Kevin Harvick (98.328 mph).

A total of 13 drivers exceeded 98 mph, with just six of those being among the eight remaining Chase drivers.

The slowest Chase driver was Kurt Busch, a former Martinsville winner who was 22nd fastest at 97.754 mph.

There will be two more practice sessions on Saturday in preparation for Sunday’s Goody’s Headache Relief Shot 500 at the southern Virginia short track. 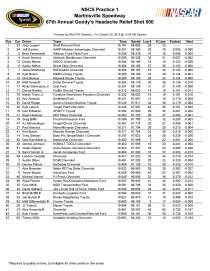 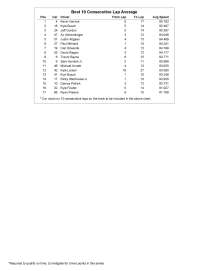