After all the craziness at Talladega, with Joey Logano somehow winning and Kevin Harvick somehow advancing, we have a neck-and-neck race for the title.

Logano and Harvick each has a 26 percent chance of winning the Sprint Cup championship. 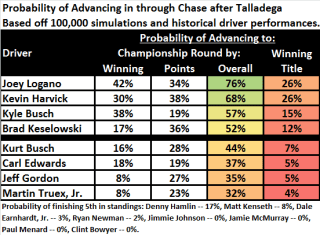 The data and image come from Andrew Maness at Pit Rho, a racing analytics firm. He and I designed the mathematical model to predict race and season outcomes.

Even more interesting is a clear separation between the top four and bottom four contenders most likely to make it to Homestead.

Along with Harvick and Logano, we also show Kyle Busch and Brad Keselowski as each having more than a 50 percent chance of making it to the final race. These four drivers are the only ones with at least a 10 percent chance of winning the title.

The bottom four drivers, including Jeff Gordon and Carl Edwards, will have to come from behind (mathematically speaking). They all have sub-50 percent odds of advancing and single-digit title chances.

We know one thing: all these numbers will change as each race goes forward. But for now, this is where we stand.

What’s also a new factor is many of the biggest threats to winning races are out: Jimmie Johnson, Matt Kenseth, and Denny Hamlin, among the names. These guys might easily win one or more of the next three races, causing the final eight Chasers to focus more on advancing via points rather than expecting to get a win.

THE BIG WHAT IF?

Separately, a lot of people are wondering what would have happened if Dale Earnhardt, Jr. had won Talladega with Harvick falling out. In that case, here’s what the odds would have been for the rest of the year: 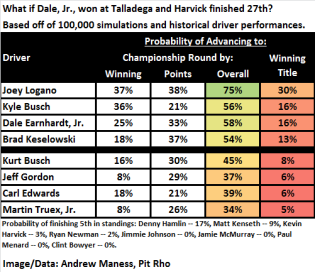 If that had actually happened, the absence of Harvick from this round would have made Logano the clear favorite and would have given everybody else a slightly better shot at winning the title. In particular, Earnhardt would have been in – and tied for second with Kyle Busch with a 16 percent chance to win the championship.

Other than Logano, Earnhardt would have had the best chance of making it into the final four. As you can see, Harvick’s contact with Trevor Bayne on the final restart last weekend caused a massive ripple effect.

Going into Talladega, our numbers last week correctly predicted seven of the eight Chasers who advanced to the third round. The only one who didn’t transfer was Denny Hamlin. Kyle Busch replaced him –he’s the one we said had the best shot outside the top eight in points of advancing a week ago. The numbers continue to prove themselves and will be a handy guide as we approach Homestead.