TALLADEGA, Ala. — The CampingWorld.com 500 will eliminate four Chase drivers, reducing the title contenders to eight Sunday at Talladega Superspeedway.

START: Marcus Lemonis, Chairman and CEO of Camping World and Good Sam, will give the command for drivers to start their engines at 2:18 p.m. The green flag is scheduled for 2:30 p.m.

NATIONAL ANTHEM: It will be performed at 2:11 p.m. by the 313th United States Army Band from Birmingham, Ala. A B-2 Stealth Bomber from the 13th Bomb Squadron, 509th Bomb Wing Whitman AFB will fly over the speedway while a semi truck flying the American Flag drives down the frontstretch.

TV/RADIO:  NBCSN will broadcast the race (and streaming available at http://stream.nbcsports.com/liveextra), starting with NASCAR America at noon, followed by Countdown to Green at 1:30 p.m. and race coverage at 2:30 p.m. Motor Racing Network will broadcast the race on radio and at MRN.com. SiriusXM NASCAR Radio will carry MRN’s broadcast.

FORECAST: The wunderground.com site predicts 75 degrees at race time with a 5% chance of rain.

LAST TIMES: Dale Earnhardt Jr. led the final 27 laps to win the spring race with Jimmie Johnson second and Paul Menard third. Last October, Brad Keselowski won to advance to the next round. Kyle Busch, who entered the race second in the points, was collected in a crash and did not advance to the third round. 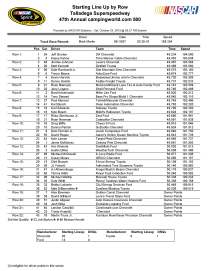