Peters, who won the 2014 race at the 2.66-mile track, earned his seventh-career pole with a speed of 178.304 mph in the second round. The driver of the No. 17 Toyota hasn’t started from the pole in a CWTS race since he did it at Martinsville Speedway in 2012.

Peters will be joined on the front row by John Wes Townley (178.065). This is the second race in a row that Townley has started on the front row in as many races. Townley won that first race, at Las Vegas Speedway, for his first-career win.

The top five was rounded out by Erik Jones, Daniel Hemric and Ben Kennedy. 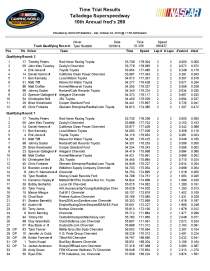