A loud cheer went out over Talladega Superspeedway when fans realized that Jeff Gordon would start from the pole in his 46th and final race at the Alabama restrictor-plate track.

After being the fastest in the first round, Gordon’s No. 24 Chevrolet was the last car to take a lap in the second round of qualifying for Sunday’s CampingWorld.com 500. Gordon put up a speed of 194.500 mph to earn his third pole for a restrictor-plate race in 2015 and his fourth overall.

“These guys work extremely hard, I know everybody does for these restrictor-plate tracks, but to get the results like that and they’ve been doing it all year long on these tracks, that’s a complete credit to all of the details that come from the top down,” Gordon told NBCSN.

Gordon’s pole is his fifth at the 2.66-mile track where he has won six times. Only one of those wins came from the pole. Gordon now has 81 poles in 793 career Sprint Cup races.

The only plate race Gordon didn’t earn a pole for was the July race at Daytona, which Earnhardt was awarded on practice speed due to rain.

“When we’ve gotten the opportunity to qualify we’ve been on the pole each time and that’s not an easy thing to do,” Gordon said. “Hopefully, we execute tomorrow and can learn from some of the mistakes (we’ve made). Me in particular, getting to pit road. We worked on that a lot yesterday. Other than that I feel real good about things.”

Only four other Chase for the Sprint Cup drivers made it to the second round. Kevin Harvick will start seventh, followed by Denny Hamlin in eighth. Joey Logano and Brad Keselowski start 10th and 11th.

Martin Truex Jr. will start from the rear Sunday after the qualifying time he posted in his No. 78 Chevrolet was disallowed after he went below the yellow line in the tri-oval. Truex’s time was the third fastest at the time.

This was the first time at Talladega the rule had been in place. Before Daytona in July, NASCAR changed the rule but there was no qualifying. Teams were reminded of the rule change in a packet of information sent to teams on Oct. 21. The line about the rule change read: “Cars MUST remain above the yellow line(s) during a qualifying attempt.”

Justin Allgaier was the last car to qualify in the first round after his team had to fix damage to the grill of his No. 51 Chevrolet. The damage was a result of Clint Bowyer accidentally backing into the car as he was leaving to go on his qualifying run. 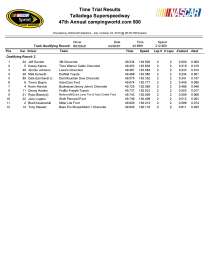 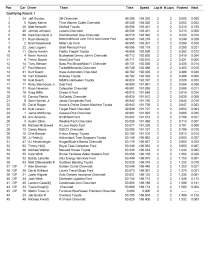