At the halfway mark of the Chase for the Sprint Cup, he has the most top fives of playoff contenders, a victory lane appearance and an enticing third-round record.

He also made the championship round last season and nearly stole the crown at Homestead-Miami Speedway.

He clearly has emerged as a 2015 title favorite.

While Logano will enter Sunday’s CampingWorld.com 500 at Talladega Superspeedway as the only Chase driver guaranteed a third-round berth through his consecutive victories at Charlotte Motor Speedway and Kansas Speedway, Hamlin has four top fives (one more than Logano) and an 18-point cushion on the Chase cutoff line as the second-ranked driver behind points leader Logano.

That hardly offers any comfort given that Joe Gibbs Racing teammate Kyle Busch entered Talladega with a 26-point margin last year and was eliminated in 41st because of a crash that happened despite a strategy of sandbagging to avoid being caught in a multicar wreck.

“We’re by no means locked in,” Hamlin said after finishing second at Kansas. “We’re still in an in‑between zone, so we’re going to need to go to Talladega and race, and it’s still been such a great Chase run for us so far; with the exception of Dover (18th)where we’ve had those two pit road speeding penalties, we’ve been top 5 every race and contending for wins.”

Hamlin opened the Chase with a victory at Chicagoland Speedway after falling a lap down because of a spin on the second lap. Sunday’s goal will be to stay ahead of such trouble to ensure being one of the eight drivers who advance.

“The success that I’ve had at Talladega has come from trying to run up front every single lap,” said Hamlin, who can clinch a third-round spot with a top 15  regardless of where anyone else finishes. “I don’t think 18 (points are) enough to just go out there and ride around. I just don’t think that’s safe.”

If the No. 11 Toyota can advance, though, Hamlin’s path to Homestead suddenly will appear more comfortable. The third round shapes up as his most favorable and a virtual firewall against elimination, given that he has wins at Martinsville Speedway (five, including most recently in March), Texas Motor Speedway and Phoenix International Raceway.

Conversely, Logano has only one win across those three tracks (Texas in April 2014).

“The Chase tracks just play out well for me,” Hamlin said. “You look at the bracket and you look at the tracks (in the third round), and you’re like, ‘Well we can win at all three of those pretty easily.’

“I knew if we could get to the final eight last year then we were going to go to Homestead with a chance. Luckily for me, the tracks play out the way they do.”

Hamlin and Logano are two of 10 repeat drivers in the second round. Here’s how they are positioned entering Talladega this year vs. last year: 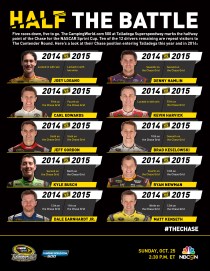