Phoenix International Raceway and the Quicken Loans Race for Heroes 500 will mark the Sprint Cup debut of Ryan Ellis.

The 25 year old will make his first Sprint Cup start in the No. 33 Chevrolet for Circle Sport Racing. The No. 33, which will be sponsored by Science Logic, has been driven in 2015 by Ty Dillon (four races), Brian Scott (nine races), Alex Kennedy (11 races), Mike Bliss (two races) and in one race each by Michael Annett, Derek White, Travis Kvapil and B.J. McLeod.

Ellis told frontstretch.com he doesn’t see this as an opportunity leading to a full-time ride with Circle Sport. 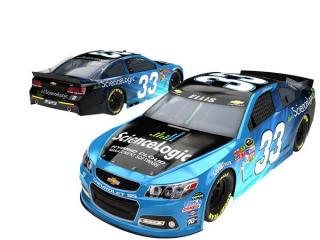 “It is more about the opportunities being available and proving to Cup teams that I belong in that garage area and that I can handle not only the car, but the competition,” Ellis said. “It is a matter of proving yourself in that capacity and having Cup team owners think of you if someone gets sick or hurt at the track. It’s how Brett Moffitt got his ride this year.”

Ellis makes his debut after competing in 29 Xfinity Series races since 2012 and 20 Camping World Truck Series races in the last two seasons. The Ashburn, Va. native has never finished in the top 10 in either series.