There are 45 cars on the preliminary entry list for Sunday’s CampingWorld.com 500 Sprint Cup Series race at Talladega Superspeedway.

The race begins the second half of the 10-race Chase for the Sprint Cup. Brad Keselowski is the defending champion of this race. His win there last October propelled him into the third round of the Chase.

The most recent winner at the 2.66-mile high-speed oval was Dale Earnhardt Jr., this past May 3. It was Earnhardt’s sixth career win at ‘Dega, but his first there since fall 2004.

NBCSN will televise the CampingWorld.com 500, with the green flag slated to fall shortly after 2 pm ET on Sunday afternoon.

Among those who will attempt to race include veteran driver Michael Waltrip, who hopes to make his 59th career start at Talladega. Waltrip will drive the No. 98 Premium Motorsports Toyota. Chad Walter will serve as crew chief. 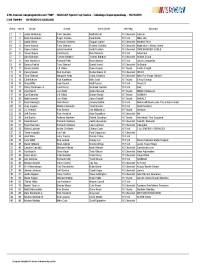