KANSAS CITY, Kan. – Brad Keselowski will start on the pole for Sunday’s race at Kansas Speedway, but he won’t have the first pit stall.

“It’s like getting a nice cheesecake with no toppings,’’ Keselowski said.

The team was penalized the loss of pit stall selection after receiving its fourth warning for inspection issues since August. NASCAR streamlined its warning system in August and stated that for every fourth warning a team accumulated, it lost the opportunity to select its pit stall for the next event.

Keselowski’s team had to choose its pit stall after the field selected and got what was left. Keselowski will pit behind Dale Earnhardt Jr. and in front of Greg Biffle. Unless something happens, those cars could be on the same lap as Keselowski throughout the race and that could make it challenging for Keselowski entering and exiting his stall.

Carl Edwards, who qualified second, got the No. 1 pit stall since his team got the first pick.

Keselowski’s team received its fourth warning last weekend at Charlotte Motor Speedway. NASCAR penalized Keselowski’s team, his teammate, Joey Logano, and the Wood Brothers, a technical partner, for installation of components and/or modifications of existing components to affect the aerodynamic properties of the vehicle will be not be permitted.

The team received its other three warnings at Michigan, Chicago and New Hampshire.

“Three of the warnings that we currently have were from the laser platform, so it’s not like it was an area of the car where we were pushing the limits,’’ crew chief Paul Wolfe said. “The written warning we got for the infraction at Charlotte, that’s different.

“The warning last weekend, we’re not proud of that, but that happens throughout the garage, guys looking at little areas trying to find that little bit more. Unfortunately, NASCAR didn’t like it. We take that and move on.’’ 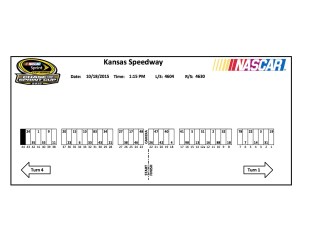