Kansas Speedway hosts the middle race of the second round for the Chase for the Sprint Cup Sunday with the Hollywood Casino 400.

The elimination race won’t come until next weekend at Talladega Superspeedway, but the points are close for those who haven’t won a race.

Only seven points separate Kevin Harvick in second and Brad Keselowski in eighth, the final spot before the cut off spot.

Matt Kenseth, the last driver on the Chase grid in 12th, is father from the cut off point than Harvick is. After his dismal day Charlotte, Kenseth will need to make up 32 points in the next two races or win for a chance to move on to the third round. 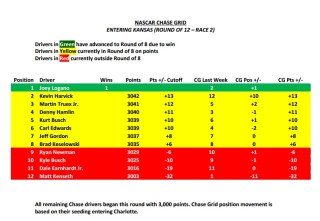