Austin Dillon was second (194.224) in his No. 3 Chevrolet, and Matt Kenseth’s No. 20 Toyota ranked third at 194.147. Kenseth, who is trying to rebound from a 42nd last week at Charlotte Motor Speedway, made 27 laps during the session, which was second only to Landon Cassill (28).

Defending race winner Joey Logano, who opened the second round of the Chase for the Sprint Cup with a win Sunday at Charlotte, was 18th on the speed chart. Kevin Harvick, who was second at Charlotte, ranked 27th, nearly 3 mph off Keselowski’s speed. NBCSN’s Marty Snider reported that Harvick’s Stewart-Haas Racing team was exploring whether it was related to a lack of horsepower. 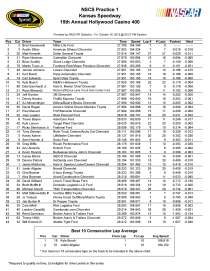