CONCORD, N.C. — The NASCAR Sprint Cup Series will play host Saturday to the Bank of America 500 — the opener of the second round of the Chase for the Sprint Cup — at Charlotte Motor Speedway.

START: Kyle White will give the command for drivers to start their engines at 7:07 p.m. ET. The green flag is scheduled for 7:16 p.m.

PRERACE SCHEDULE: The Sprint Cup garage opens at 1 p.m. The drivers meeting is at 5 p.m. Driver introductions are at 6:25 p.m.

NATIONAL ANTHEM: It will be performed by Natalie Weiss at 7:01 p.m.

TV/RADIO: NBC will broadcast the race (and streaming available at http://stream.nbcsports.com/liveextra) at 7 p.m. The prerace will start with NASCAR America at 5 p.m. on NBCSN and Countdown to Green at 6 on NBCSN. Performance Racing Network will broadcast the race on radio and at GoPRN.com. SiriusXM NASCAR Radio will carry PRN’s broadcast.

FORECAST: The wunderground.com site predicts 59 degrees at race time with a 36% chance of rain.

PAST TWO RACES: On May 24, Carl Edwards led the final 21 laps with a successful fuel mileage gambit for his first victory of the 2015 season. On Sept. 28, 2014, Kevin Harvick led 162 laps to secure a berth in the third round of the Chase for the Sprint Cup. 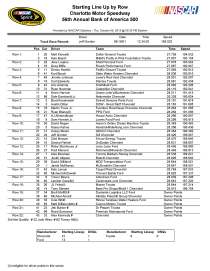