As the second round of NASCAR’s Chase for the Sprint Cup begins, the 12 remaining championship contenders likely will have their minds in two places this weekend.

One location obviously will be at Charlotte Motor Speedway for the Bank of America 500. But some also might be thinking of the Oct. 25 race at Talladega Superspeedway – and how important it is to have a win entering that elimination race.

“Every race is important, obviously,” Martin Truex Jr. said. “But I think for this round, Talladega being the third race is really like on everybody’s mind. It would be nice to win one of those first two, just not to worry about Talladega. I think everybody is worried about it right now.” 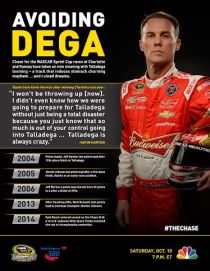 Defending Sprint Cup champ Kevin Harvick knows the importance of doing well in the Chase race at Charlotte – his victory there last year helped launch his push toward the championship.

“It definitely gave us that break,” Harvick said of that win. “You want to do all that you can do at Charlotte and Kansas just because you don’t want to (go) into Talladega (needing a win), as much as you can try, just for the fact that there’s so much out of your hands.

“Talladega (is) the one that everybody would be all together with and circling and saying this is the one that we don’t want to go to just for the fact that it’s just Talladega, and there’s just so many things that can go (bad) really fast.”

Dale Earnhardt Jr. concurs. Even though he won two of the three restrictor-plate races this season, Earnhardt doesn’t want to have to depend on a win at ‘Dega to advance.

But while Harvick and several other drivers are focusing on Charlotte, Earnhardt thinks his best chance to win in Round 2 is next week.

“You’d like to go into Talladega with a win at Kansas or Charlotte, and I think we can go to Charlotte and compete,” Earnhardt said. “We’ve got a better shot maybe at winning at Kansas.”

Earnhardt was leading last year’s Chase race at Kansas when the right-front tire on his No. 88 Chevrolet blew, costing him the victory and dealing a serious blow in his failure to advance. It’s something he has not forgotten.

“We were going to run in the top three, if not win the race,” he said. “We’ve been good and competitive over the last couple weeks. We should go into (Charlotte and Kansas) and finish good.”

But strong finishes might not be enough with Talladega looming. That’s why Earnhardt is focused on winning one or both of the next two races.

“Even if you do run good in the first two, anything outside of a win, you still are concerned with Talladega because you could have a terrible finish there,” he said.

Kurt Busch knows what winning at Charlotte did for Harvick and his quest to the championship last season.

“When I watched Kevin win at Charlotte,” Busch said, “I basically went into (crew chief) Rodney Childers’ office and I said, ‘This is yours to lose now. You have a hall pass through Talladega, you don’t even have to sweat it.’

“That’s the ultimate thing is if you have to go to Talladega to try to get a good finish, that’s going to be the toughest hurdle to overcome.”