START: Actress and philanthropist Rosie Perez will give the command for drivers to start their engines at 2:37 p.m. ET. The green flag is scheduled for 2:45 p.m.

DISTANCE: The race is scheduled for 400 laps (400 miles) around the 1-mile concrete oval.

PRERACE SCHEDULE: The Sprint Cup garage opens at 8:30 a.m. The drivers meeting is at 12:30 p.m. Driver introductions are at 2 p.m.

NATIONAL ANTHEM: It will be performed by Sam Harris of X Ambassadors at 2:31 p.m..

FORECAST: The wunderground.com site predicts 63 degrees at race time with a 1% chance of rain.

PAST TWO RACES: On May 31, Jimmie Johnson outdueled Kevin Harvick and led the final 23 laps to extend his record win total at Dover to 10. On Sept. 28, 2014, Jeff Gordon led 94 of the final 96 laps to advance to the third round of the Chase for the Sprint Cup.

Set by the rulebook after rain scuttled the qualifying schedule. 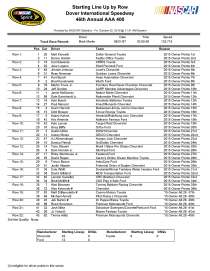