When a majority of the field sported retro paint schemes earlier this month in the Southern 500, Kyle Larson‘s Mello Yello paint job was a fan favorite.

That look won’t be making an encore appearance in the final nine races of 2015, but Chip Ganassi Racing’s No. 42 Chevrolet will be changing its appearance for eight of them to coincide with a promotion with its sponsor, Target.

CGR announced Tuesday Larson’s car will have multiple plaid themed paint schemes over the last nine races, with the exception of the penultimate race at Phoenix International Raceway.

“At Darlington, we had one of the most talked about paint schemes, and I know these eight plaid inspired cars will generate some buzz around the garage,” Larson said in a team release. “The cars are definitely stylish and unique. Target comes up with some great ideas, and it’s really cool for our team to be a part of such a big initiative. A lot of the tracks left on the schedule are places I enjoy racing, so hopefully we get some good finishes in the plaid cars.”

Larson is still looking for his first Sprint Cup win in his sophomore year in the series.

CGR has provided graphics of four of the paint schemes that will be used during the eight races to close out the year. Here are the remaining three. 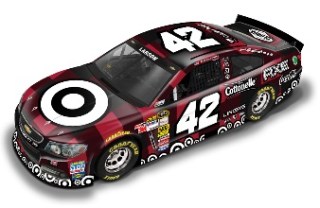