START: NBA legend Jerry West and women’s tennis champion Billie Jean King will give the command for drivers to start their engines at 3:07 p.m. ET. The green flag is scheduled for 3:16 p.m.

PRERACE SCHEDULE: The Sprint Cup garage opens at 9 a.m. The drivers meeting is at 1 p.m. Driver introductions are at 3 p.m.

NATIONAL ANTHEM: It will be performed by Jim Cornelison at 3:01 p.m..

FORECAST: The wunderground.com site predicts 70 degrees at race time with a 0% chance of rain.

LAST TIME: With a daring pass for the lead on Kyle Larson and Kevin Harvick, Brad Keselowski won the Chase for the Sprint Cup opener for the second time in three years. 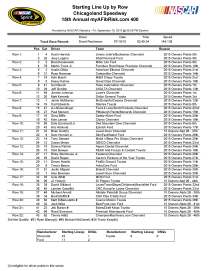