Denny Hamlin, battling an ACL injury and fighting back from a spin on Lap 2, won Sunday’s Sprint Cup race at Chicagoland Speedway, the first round of the Chase for the Sprint Cup.

Hamlin was one of three Joe Gibbs Racing drivers in the top five with Carl Edward finishing second and Matt Kenseth in fifth.

Ryan Newman finished fourth for his fifth top-five finish of the year and his first since the spring Bristol race. 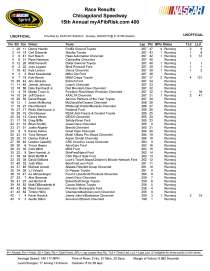