JOLIET, Ill. — Backing up his bold prediction to “pound them into the ground,” Kevin Harvick outperformed the primary threat to his title defense in the first on-track opportunity of the 2015 Chase for the Sprint Cup.

Harvick led Friday’s opening practice for myAFibRisk.com 400 at Chicagoland Speedway, turning a 188.317-mph lap in his No. 4 Chevrolet. The defending series champion posted the speed on his 15th and final lap of the session on the 1.5-mile oval.

Joe Gibbs Racing, which has won eight of the past 11 races, put only one of its four Toyotas in the top 10 (Kyle Busch in seventh at 186.896). Harvick took umbrage Thursday at the suggestion that JGR was the favorite entering the playoffs.

With the strong threat of a midafternoon rain threatening to cancel a 6:45 p.m. ET qualifying session, the practice speeds could be used to set the lineup and starting order for Sunday’s Chase for the Sprint Cup opener (3 p.m. ET, NBCSN). That could mean mediocre starting spots for Denny Hamlin (30th), Clint Bowyer (27th) and Dale Earnhardt Jr. (20th).

It also would mean elimination for Ryan Blaney, Michael McDowell and Travis Kvapil, whose teams aren’t locked into the field. 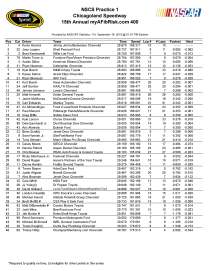