It’s finally done. The Chase is here, and everybody who won a race in 2015 is in – plus a few other stragglers. Now we can focus on a more pertinent question:  Who is going to win the title? We have the numbers to break it down.

Based on driver performance in 2013-2015, along with their seedings, we can predict who will win the title – along with a prediction for which drivers will make it through each round. The numbers will be updated each week as we get new results.

Paul Menard and Clint Bowyer, the last two drivers to make the Chase are still … on … the … bubble. Of the 16 drivers who made it, these two had the lowest chance of getting in. And they are now rewarded with the lowest chances of moving on. Each of them has a coin flip’s chance of moving forward or being bounced out. 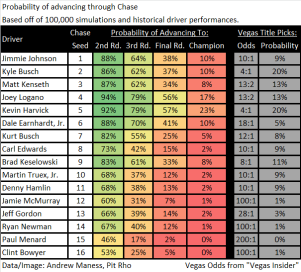 The most likely driver to make it to Round 2 is Joey Logano – at 94 percent.

The five drivers with the best chance at the title are Kevin Harvick, Joey Logano, Jimmie Johnson, Kyle Busch, and Dale Earnhardt, Jr. In total, there is a 70 percent chance that one of these five will be the champion. That’s in line with the fact that these drivers won 15 of the first 26 races this year.

DON’T BE OVERLY OPTIMISTIC ON GIBBS

We’ve also compared our model’s projections to what Vegas thinks will happen, allowing you to find undervalued bets. Kevin Harvick, Joey Logano, and Dale Earnhardt, Jr. are the best “value” bets, because Vegas doesn’t think they are as good as we do.

In contrast, Vegas appears to be overpaying for Martin Truex Jr, along with all four Joe Gibbs cars: Kyle Busch, Matt Kenseth, Carl Edwards, and Denny Hamlin. Each of these drivers is at least 6 percent worse in our model compared to the bettors.

“It looks like Vegas is really, really high on all of the Gibbs cars compared to our model, probably because of their recent late-summer stretch,” said Andrew Maness of racing analytics firm Pit Rho. He and I designed this model together to predict season outcomes.

Maness continued: “What I don’t like about that type of bet is the Chase renders late-summer success pretty irrelevant. We can’t count on Gibbs being the top team in November.

“A historical instance worth pointing out, Vegas was really into Hendrick cars at the start of the 2014 Chase, and many folks wondered if all four HMS cars would advance to the final round. But they were missing by Homestead – the current Chase format really jumbles things up every few weeks, regardless of which cars have speed.”

Also note: if you add up all the odds on Vegas betting, you get 134 percent. It’s higher than 100% because it reflects the fees the sportsbook makes.

Our prediction numbers from last week were spot on, and the drivers who got in were the ones we said would, with a giant 17 point cushion between who was in and who was out – led by Aric Almirola. In fact, our numbers had the 16-driver field set ever since Pocono the first weekend in August. That’s when Kasey Kahne finished 43rd to find himself on the outside looking in, and there was no change to the Chase field afterward. Each week we will update the numbers, as the Chase progresses, to show who is on track to win the title in Homestead.