John Force, the winningest driver in NHRA drag racing history, will race a special Jeff Gordon tribute car in this weekend’s NHRA Carolina Nationals at zMAX Dragway, the start of the six-race Countdown to the Championship playoff.

Beginning the quest for his 17th career Funny Car championship, Force will drive a one-of-a-kind Chevrolet Camaro SS Funny Car dedicated to Gordon and his legendary career in NASCAR. 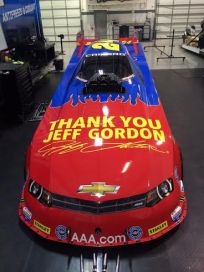 “This special Chevy Funny Car is just a way for me, my family, my team, my sponsors, NHRA and the fans to say thank you for being a great champion and being such a great driver in NASCAR,” Force said of Gordon. “I put as many flames as could fit on my hot rod in Jeff’s honor.”

Force, who has a record 143 wins in his career, finished runner-up in last year’s Carolina Nationals (which was subsequently completed two weeks later at the Texas Motorplex after rain at Charlotte washed out eliminations).

With two wins thus far this season, Force enters the Countdown in fifth place. He’s only won once at zMAX Dragway: in the inaugural Four-Wide Nationals in 2010.

“This is NASCAR country so we will see a lot of new fans and I love talking to them about all kinds of racing,” Force said.