RICHMOND, Va. – The Chase for the Sprint Cup field will be set after tonight’s Federated Auto Parts 400 at Richmond International Raceway.

START: Christopher McKinney will give the command for drivers to start their engines at 7:37 p.m. ET. The green flag is scheduled for 7:44 p.m.

PRERACE SCHEDULE: The Sprint Cup garage opens at 1:30 p.m. The drivers meeting is at 5:30 p.m. Driver introductions are at 7 p.m.

NATIONAL ANTHEM: It will be performed by the 29th Division Band from Ft. Lee at 7:31 p.m..

FORECAST: The wunderground.com site predicts 68 degrees at race time with a 15% chance of rain. 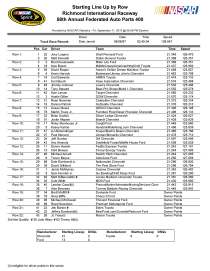