“Qualifying here is so interesting because the tires wear out so much during each run,” Logano told NBCSN. “Kind of interesting to see if you’re fast in one run the adjustments you need to make to be there at the end.”

Logano has now swept the poles for the spring and fall races at Richmond.

“It’s funny because my guys are giving me a hard time because I just qualified second in the Xfinity race coming up and I missed it by a hundredth of a second.’

Logano later told media that Kenseth’s “exceptional” car is the one to beat Saturday night. Kenseth was looking to earn his fourth pole of the year.

“I didn’t do (Turns) 1 and 2 right, I got a little too aggressive getting back to the gas and messed up my center and my exit (from the turn),” Kenseth said.

It’s the second pole in two weeks for Penske after Keselowski earned it at Darlington Raceway for the Southern 500 before JGR’s Carl Edwards won the race.

The two races before that saw JGR poles from Denny Hamlin and Matt Kenseth but with both team splitting the victories, with Logano winning at Bristol and Kenseth at Michigan.

Jeff Gordon, in his last race at Richmond, will start 23rd. 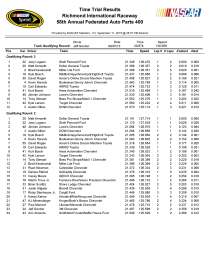 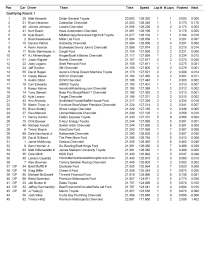