DARLINGTON, S.C. — Brad Keselowski will start from the pole position for the first time this season and the first time at Darlington Raceway in Sunday’s Southern 500 on NBC.

Kurt Busch, who was the Sprint Cup teammate of Keselowski at Team Penske from 2010-11, will start second. Kevin Harvick and Joey Logano will start from the second row.

Jeff Gordon, the active leader with five Southern 500 victories, will begin from the fifth spot in his last start at Darlington.

Alongside in the third row will be Denny Hamlin, whose No. 11 was the fastest-qualifying Toyota. 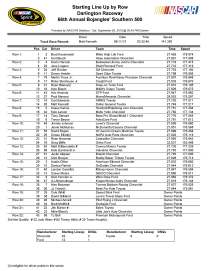