If anyone could use a blast from the past this weekend in the Southern 500, it’s winless Roush Fenway Racing.

The team got off to a good start with Greg Biffle claiming the fastest speed in the first Sprint Cup practice at Darlington Raceway. 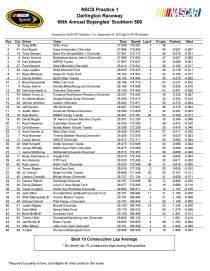