The NASCAR Xfinity Series will race at Road America for the sixth consecutive year with Saturday’s Road America 180 Fired Up by Johnsonville.

START: Steve Johnson, vice president of Manufacturing Johnsonville will give the command for drivers to start their engines at 3:08 p.m. ET. The green flag is scheduled for 3:22 p.m.

NATIONAL ANTHEM: It will be performed by the Christi Sadiq at 3:01 p.m.

FORECAST: The wunderground.com site predicts 69 degrees at race time with a 22% chance of rain.

LAST TIME: Brendan Gaughan led the final five laps to win last year’s race and score his first career series victory. Alex Tagliani ran out of fuel four laps from the finish, made it to pit road and raced his way from 24th to finish second. Chase Elliott, who would go on to win the series title last year, placed fourth. The second half of the race was run in the rain.

STARTING LINEUP: Rain washed out qualifying Saturday morning. As a result, the starting grid has been set based upon Friday’s first of two practice sessions. Ben Rhodes earned his first pole in seven career Xfinity starts. Here’s the starting lineup: 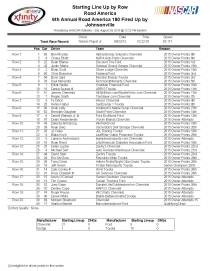