Several drivers were involved in incidents, including Jennifer Jo Cobb and John Wes Townley, who both slammed into a tire barrier in the same exact spot during practice.

Townley’s truck suffered extensive damage, forcing his team to go to a backup truck. Cobb’s team was working to repair her truck. 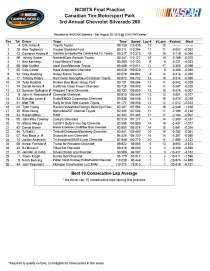