Blaney was also third-fastest in the first practice session of the day.

Stanton Barrett, who was unable to practice in the first session because the liftgate on his hauler broke and the team was unable to unload his race car, was able to finally get on track for two laps late in the second session, thus making him eligible to qualify Saturday at 12:15 pm ET.

The Road America 180 Fired Up By Johnsonville race will take the green flag less than three hours later at 3 pm ET. 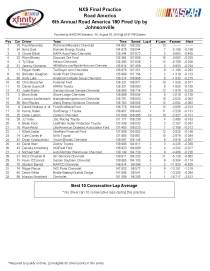