Whether you’re visiting Darlington Raceway for the Sept. 6 Southern 500 or watching from home on NBC, you might experience confusion or a sense of Déjà vu spanning 40 years of NASCAR history.

With the Southern 500’s return to its traditional spot on Labor Day weekend for the first time since 2003, many Sprint Cup teams are using the opportunity to commemorate the history of their team or sponsors with retro paint schemes.

Here’s a look at the paint jobs that will populate the field next Sunday at the track “Too Tough to Tame,” which held its first race in 1950.

Brad Keselowski – The 2012 Sprint Cup champion’s No. 2 Ford will look like a Miller High Life car Bobby Allison once drove. Allison won at Darlington five times, including a sweep of the 1975 races with Team Penske. 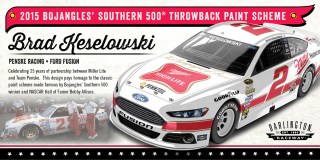 Austin Dillon – The No. 3 belonging to the Richard Childress Racing driver pays tribute to the early days of RCR when Childress, Dillon’s grandfather, was behind the wheel. 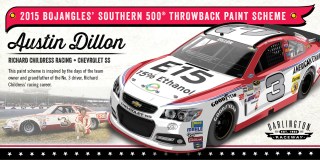 Kevin Harvick – The defending Darlington race winner. The paint scheme for Harvick’s No. 4 Budweiser Chevrolet was announced back in May. Harvick’s car “mimics the first can Budweiser produced.” 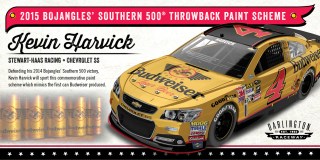 Trevor Bayne – Party like it’s 1998! Bayne will be driving the paint scheme used by Mark Martin in the Sprint Cup in 1998, when he won seven races and finished second in the points to Jeff Gordon.

Sam Hornish Jr. – The paint job for the No. 9 Ford at Richard Petty Motorsports is a tribute not to the Sprint Cup Series but to the 1990s when the Xfinity Series was known as the Busch Grand National Series. The scheme looks like the one driven by Mark Martin for many of his 49 series wins. 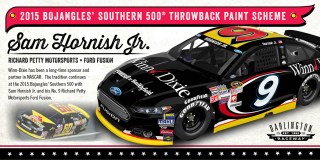 Danica Patrick – The No. 10 Go Daddy Chevrolet is meant as a tribute to Darlington, affectionately known as “The Lady in Black.” 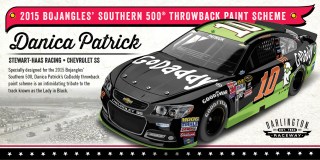 Denny Hamlin – The No. 11 Toyota pays tribute to when Cale Yarborough drove the No. 11 in the 1970s. Yarborough won five times at Darlington. 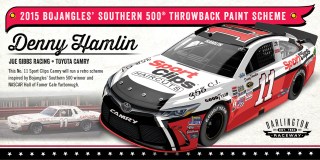 Tony Stewart – The three-time Sprint Cup champion has never won at Darlington, but if he does this year, it will be with the original Bass Pro Shop logo from the late 70s adorning the hood of his No. 14 Chevrolet. 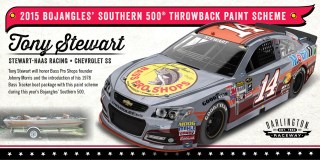 Clint Bowyer – The No. 15 5-Hour Energy Toyota was hand-painted to honor the late Buddy Baker, who drove a No. 15 car sponsored by RC Cola in 1974 for Bud Moore. 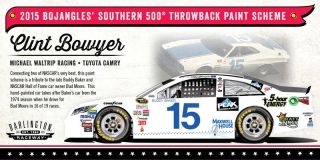 Greg Biffle – Biffle’s No. 16 Ford will be sponsored by Ortho. The red in the scheme is based off the color of Ortho’s original delivery cars. 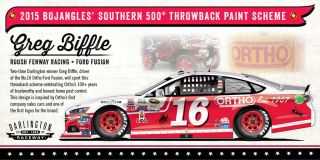 Rickey Stenhouse Jr. – The No. 17 Ford for Roush Fenway Racing pays tribute to when David Pearson wheeled the 17 for the Wood Brothers, winning six of his 10 Darlington races for the team. The Cargill sponsored car was unveiled at Darlington Raceway. 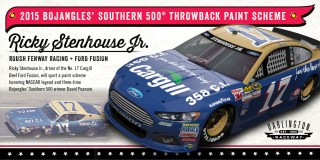 Ryan Blaney – The Wood Brothers decided to turn their No. 21 Ford into a mosaic depicting the team’s 65-year history. The scheme includes about 2,000 pictures dating back to 1950. 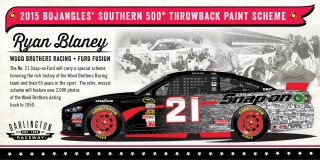 Jeb Burton – The son of Ward Burton will race the paint scheme his father used when he won the 2001 Southern 500. 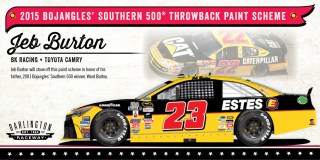 Chase Elliott – Racing his last Sprint Cup event of 2015 before going full time in 2016, Elliott’s No. 25 Chevrolet is a more subtle throwback. The angled red stripe toward the rear-end is a tribute to the paint scheme used by his father, Bill Elliott, when he won the Southern 500 and the “Winston Million” in 1985. 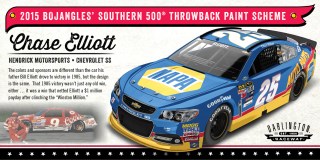 Paul Menard – The 2011 Brickyard 400 winner personally helped out in the design of his No. 27 Chevrolet, which is based on the marketing for the Menard’s home improvement stores in the early 1970s. 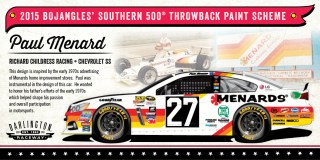 Ryan Newman – The RCR driver’s No. 31 Chevrolet will be an homage to what Caterpillar’s heavy equipment looked liked in the 1970s. Newman has never won at Darlington. 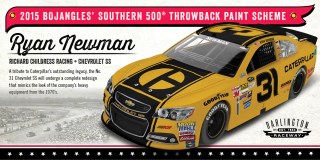 Josh Wise – Twelve years after Ricky Craven came out on top in the closest finish in modern NASCAR history at Darlington in the No. 32, Wise and Go Green Racing our bringing back the paint scheme Craven used in the 2003 race. The sponsors are different, but the bright “Tide” orange is easy on the eyes. 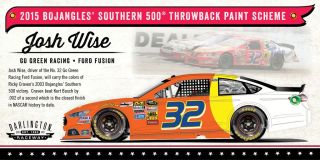 Landon Cassill – The paint scheme for Cassill’s No. 40 Snap Fitness Chevrolet is a tribute to the “God Bless American” scheme used by Sterling Marlin in the Sept. 31, 2001 Sprint Cup race at Kansas Speedway. That was the second race following the 9/11 terrorist attacks. 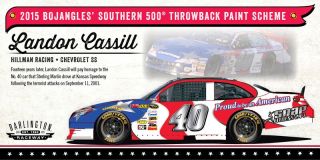 Kurt Busch – Stewart-Haas Racing didn’t always exist in its current form. Before Tony Stewart joined the team, it was known as Haas CNC Racing, which first competed in the Sprint Cup season in three races in 2002. Busch’s paint scheme is the original one driven by Jack Sprague. 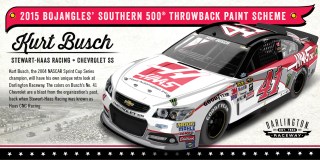 Kyle Larson – The No. 42 Chevrolet gets two tributes in one with this Mello Yello paint scheme. It’s the look used by fictional driver Cole Trickle in the 1990 film “Days of Thunder” and it would then be used by Kyle Petty from 1991 to 1994 when he drove the No. 42 for SABCO Racing, which was owned by Ganassi co-owner Felix Sabates. 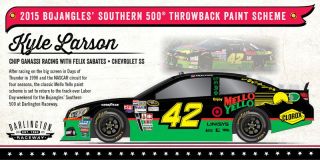 Aric Almirola – In 1972, STP premiered as the main sponsor of Richard Petty. He would go on to win eight times that year leading to a championship. With STP, Petty would earn 60 of his 200-career wins. Almirola sports the paint scheme from that 1972 campaign. 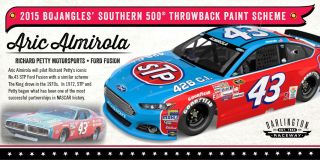 Michael Annett – The No. 46 will carry the color scheme and logo of Annett’s sponsor from the 1970s. 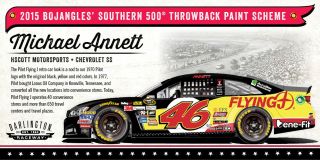 Jimmie Johnson – The three-time Darlington winner will sport the Lowe’s Home Improvement logo used in the 1940s and 50s. Lowe’s was founded in 1946, four years before Darlington hosted its first race. 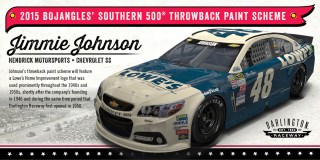 David Ragan – The two-time Sprint Cup winner is using the retro weekend to honor the Cup career of his father, Ken Ragan. The elder Ragan raced in 50 Sprint Cup races from 1983-90 driving mostly for his brother Marvin. His career included five starts at Darlington Raceway. This paint job was raced by Ken Ragan in 1987. 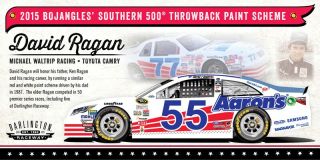 Dale Earnhardt Jr. – The 12-time most popular driver will have a new, one-time sponsor for the Southern 500. Earnhardt’s No. 88 Chevrolet will bear the name and colors of Valvoline motor oil. Valvoline sponsored drivers like Cale Yarborough, Neil Bonnett and Buddy Baker in the early 1980s, but is probably more well known among fans for its time with Mark Martin at Roush Racing throughout the 1990s. 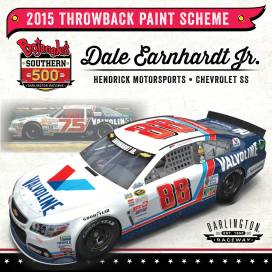 Also participating in the retro fun is Goodyear. The tire company has branded the tires for the Southern 500 race weekend with an older white logo, which can be seen on Twitter at @GoodyearRacing.