There are 40 cars on the preliminary entry list for the Xfinity Series’ Fired Up by Johnsonville 180 at Road America.

Paul Menard and J.J. Yeley are the only Sprint Cup drivers to be found on the entry list. Menard will be in the No. 33 for Richard Childress Racing and Yeley will compete in the No. 28 for JGL Racing.

Boris Said will be in the No. 54 Toyota for Joe Gibbs Racing and will have Kenny Habul as a teammate in the No. 20.

Brendan Gaughan is the defending winner of the Road America race. 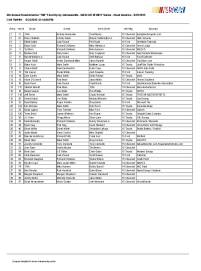 Former NASCAR Chairman Brian France defended his leadership style when running the stock-car series and said in an interview with Sports Business Journal that he was working on leaving the sport before he was ousted after his DWI arrest in August 2018.

Brian France held that position until Aug. 6, 2018, when he took a leave of absence after his arrest for driving while intoxicated in Sag Harbor, New York. He was replaced by Jim France and did not return to NASCAR.

Brian France pleaded guilty to driving while intoxicated in June 2019. As part of the agreement, he was required to complete 100 hours of community service and undergo alcohol counseling. If he completes those and does not run afoul of the law, his misdemeanor charge will be reduced to a non-criminal infraction in June 2020.

France told Sports Business Journal that he was actively talking to and identifying potential replacements before his arrest but did not go into detail.

France, who oversaw the TV deal with NBC and Fox that goes through 2024 and created what the Chase/playoff format, defended his absence from the track during his reign. France did not attend every race and that became an issue in the garage, raising questions about how involved he was with the sport.

“I understand that kind of criticism, but there is no other sports league that gets any criticism like that,” France told Sports Business Journal of the time he spent at the track. “I’ve always found that a bit interesting that no one else asks another commissioner how many football games or practices he made.”

Jim France is at the track nearly every weekend. Brian France told Sports Business Journal that while his uncle attends more races to match his objective, “(it) didn’t match up with mine, so I had to take the criticism on my way to managing the commercial side.”

France, who endorsed Donald Trump for president at a Feb. 29, 2016 rally at Valdosta State University in Georgia, accompanied President Trump on Air Force One to Daytona International Speedway on Sunday, according to the pool media report.

After rain postponed Sunday’s race, Cup drivers will get back on track Monday at Daytona International Speedway to complete the Daytona 500. And the forecast looks very good for Monday’s race.

The race was halted after 20 of 180 laps with Ricky Stenhouse Jr. leading.

FORECAST: The wunderground.com forecast calls for partly cloudy skies with a high of 73 degrees and a 3% chance of rain when the race resumes.

The Daytona 500 has been postponed until Monday, NASCAR announced Sunday evening.

The wunderground.com forecast calls for partly cloudy skies with a high of 72 degrees and an 11% chance of rain when the race is scheduled to resume.

The race was scheduled to take the green flag Sunday at 3:18 p.m. ET but that was pushed back because of President Donald Trump’s participation in ceremonies before the race. He gave the command to start engines and his motorcade led the field on a pace lap. An extra pace lap was done to honor Jimmie Johnson, who is making his final Daytona 500 start.

As the field was set to take the green flag at 3:29 p.m. ET, rain in Turns 1 and 2 prevented the start. Rain fell throughout the track and led to a 51-minute delay.

When the race resumed, the field completed 20 laps before rain led to a caution at 4:36 p.m. ET. The field again was brought to pit road and the race was stopped. NASCAR told teams they could uncover cars on pit road at 6:18 p.m. ET but almost immediately there were reports of rain drops around the track. Drivers were called to their cars but never got in them. It began to pour around 6:44 p.m. ET. The race was called at 6:50 p.m. ET

This is the second time the Daytona 500 has been postponed by rain. It happened in 2012.

Rain has once again put a damper on the 62nd Daytona 500.

The race got through the first 20 laps of the scheduled 200-lap event before the yellow flag came out, sending cars back to the pits.

Pole Sitter Ricky Stenhouse Jr. and his Chevrolet has led all laps since the green flag fell. Fords make up the next five spots (Joey Logano, Aric Almirola, Ryan Newman, Kevin Harvick and Brad Keselowski), while the highest Toyota’s driver — Martin Truex Jr. — is back in 31st place.

It was the second time rain has impacted the event. After seven pace laps, the start of the race was delayed for 51 minutes due to rain. Engines were re-fired at 4:14 p.m. ET

The race is airing on Fox.

We will keep you updated on the status of the race and when it resumes.

Race of survival at Daytona: Will drivers keep blocking despite risk? February 13, 2020 5:00 pm